WinAce screenshot of Winterfell and surrounds.

Currently working on routines to auto-build starting country positions - set ownership, terrain, resources, items, etc., so that we can specify just the starting capital location for each country, then auto fill the rest of the country details. Starting deity sectors/mil will also be done this way. Here's a picture of The North layout testing. 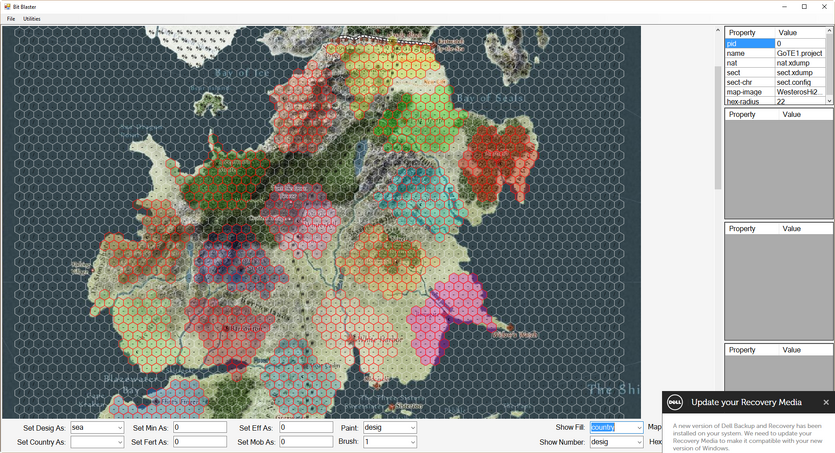 Much of the groundwork to generalize the econ/build system is now live on the Changeling blitz. The commit log is huge and contains as much cleanup as it does changes. This is just the groundwork to make space in the data tables, xdump and config files, the implementation of the business logic still needs to be done. For example, most of the unit build logic is hardcoded directly to lcm/hcm/mil/oil/rads etc. Same for sectors and bridges. So, all of that has to be surgically removed and new, general logic implanted. Then, testing and probably more code cleanup, before a new build can be pushed to the Changeling blitz.

A first round of map development and testing is finished. Attempts to create a rich and beautiful map by using a wide variety of symbols ('*' for tundra, '[' for forest) didn't pan out as there just aren't enough keyboard characters. Additionally, many of the characters are reserved by the server, that is, they are hardcoded for certain functionality. So, while '*' makes a beautiful, snowy-looking tundra, it also is hardcoded to allow planes to be built. So, instead, we'll probably try to drop a jpeg of Westeros into WinAce, behind its map drawing pane (we did this in Star Wars empire).

We're also trying to figure out how to put highways and other things into multiple different terrains/topologies. The server only allows one designation/terrain, so we can't have a '+' in urban terrain and a '+' in rural terrain. This one is still tbd.

On the plus side, we have a map server up and running with about a dozen countries designed with resources, starting stuff, POGO sectors etc. Here was the breakdown of the starting country in this first iteration

So, seasoned players are probably thinking "How is it possible to only have viable country with only 200 total min?" The answer two-fold (1) since there's no edu/happi/tech/res, that whole supply chain goes away and (2) we can tweak the production efficiency of various sectors in the supply chain to get whatever rates of production/consumption for the commodities and products we want. So, the net result should hopefully be a viable country with a very small number of very flexible sectors (the urban sectors) and a medium number of less-flexible sectors (the rural sectors), which, it is hoped, will lighten the player workload of managing large countries. So, a functional country will have something like 1 mine, 1 quarry, 10 forests, 10 farms and 20 additional plains sectors for forts, highways, buffers and other tactical/strategic purposes. Plus one city/castle/capital with 10k civs for additional civs/tax generation.

Round two of map design is now underway.

Coding is ongoing. Generalizing the econ/build system away from hard-coded lcm/hcm BOM to a more general BOM for sectors and units required open-heart code surgery. That, combined with the can-of-worms that is the server code, resulted in a major coding effort. Things are wrapping up and looking good, and some prelim testing is underway. Changes so far, not counting tests and docs: 54 files changed, 1432 insertions(+), 1402 deletions(-).

The map editor is coming along. Refactored all of the persistent storage away from SQL and into .xdump/.config format so that the editor can read/write the output/input of empdump. This way, a game state can be dumped/opened in the editor, edited, then saved/imported back into the game state. Also added a few map edit tools, like brushes (for filling in large areas), click-to-paint, conditional set for sector properties (to set a property for a large number of similar sectors), open/save/edit project files, an edit grid for nations (add/edit nations), and more. With enough features, testing and generalization, the editor could be a nice tool for building other theme games.

Here's another screenie of the tool 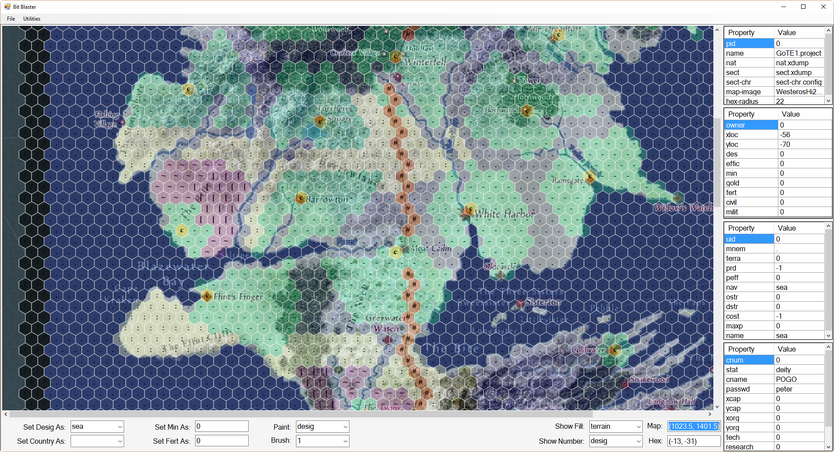 Started work on a tool to make maps. Here's a screenshot of the map editing tool, still under development. It exports pertinent info in xdump format so theoretically, once we're done with the map design in this tool, we can just import it into the game and we're good to go. The tool also saves the data in an sql database, instead of a file, so multiple people can edit the map. What you see here took about 15 minutes to create, so extrapolating time for the full map (which, at this scale shown, has around 10k sectors)... 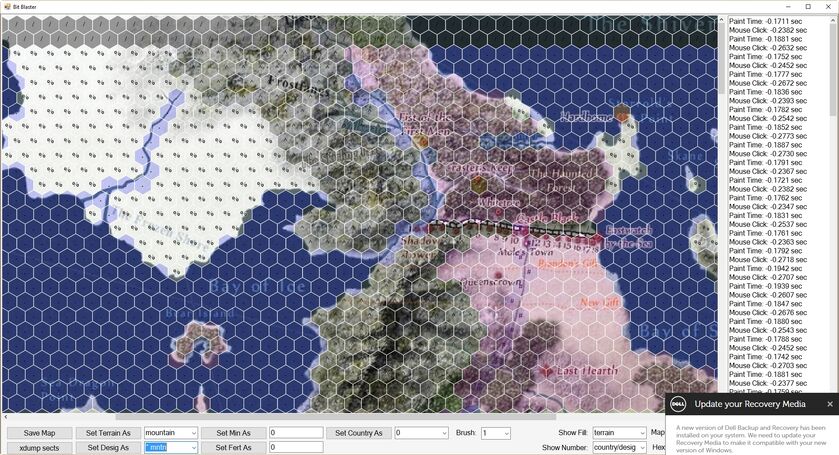 On the game marketing side, did a quick google search for board game forums and came up with a pretty good list of victims to spam with invitations. List.

Note the GoT board game forum :)

There are also a ton of boardgame clubs and meetups, but they're a bit iffy in terms of getting a message through. I'm pretty sure we'll have no shortage of free spam channels, thou.

We're also going to fire up the archive list of players, which we have Bungee to thank for. Hoping we can track him down (or Ski).

I told Markus I could get 49 players!

A preliminary registration (more of an expression of interest) is up as a barometer of interest. Also, ideas for marketing would be most welcome (email Jeff at JeffHFCotter@gmail.com)

On the server coding side, Markus is getting stuck into the implementation. Some of the dragon (special flyer) code has been fleshed out and tested a bit. Here's the dragon capabilities table (subject to change!)

To get around the inherent link in the code between cargo/para load (we want it to be small) and the payload/damage (we want it to be big), Markus is putting small nukes on the dragons and delivering them as payload. Evil.

Recently, work began on generalizing the economy/value stream so that we can change the usual iron/oil/dust economy into an iron/lumber/stone economy. Unfortunately, the server code is hardwired to the existing value stream, and so Markus is in deep surgery with the code. Should be a good overall upgrade to the code base when it's done, with configurable build tables for resources->commodities->products->units/sectors. The larger goal is to give modders a bit of flexibility in custom game design without requiring a PhD in c coding.

Also, Ron K is a gentleman and will help with WinAce improvements. WinAce is written in VB6, which was distributed on 8" floppies. If any crazies are out there and want to bring WinAce project into the 21st century, I'd be impressed if they could get it running in a lifetime!

Here's a picture of some noodling with the map's hex scale. I think we can cover all of Westeros and a bit with around 7k sectors (around 2.5k country sectors, the balance comprising sea and tactical terrain).

You can see a few of the map design elements in the picture. We're aiming for an open countryside, with a mind for the player-effort impact of large countries. The design here concentrates productive sectors into a few (maybe not this few) number of sectors and compensates using production efficiency. The rural areas are also a bit of a natural barrier/buffer between countries.

A bunch of other cool map stuff in the works is not shown.

We're currently debating changing the victory conditions away from declaration/defend and using a victory points system with a fixed game length.

A number of really good board games use Victory Points with a fixed game length to very good effect. We would want to avoid turtling (where the winning strategy is to hunker down) in a VP system, so VPs should be highly contestable (for example, something to capture/hard to hold, like another player's city) or deniable (for example, something of another player's to destroy, like their bars).

A few ideas are described on the GoT Empire - Info Pages. It's all still tbd, so stay tuned.

Retrieved from "https://wolfpack-empire.fandom.com/wiki/GoT_Empire_-_Dev_Blog?oldid=724"
Community content is available under CC-BY-SA unless otherwise noted.